A collection of open-licensed statistical tools written in Java

DKPro Statistics is a collection of open-licensed statistical tools written in Java. The software library is divided into the following modules:

A more detailed description of DKPro Statistics is available in our scientific articles:

Please cite our COLING 2014 paper if you use the software in your scientific work.

In addition to that, you can add each of the modules described above separately (e.g., artifactId dkpro-statistics-agreement).

DKPro Statistics is available as open-source software under the Apache License 2.0 (ASL). The software thus comes “as is” without any warranty (see license text for more details).

Prior to being available as open-source software, DKPro Statistics has been a research project at the Ubiquitous Knowledge Processing (UKP) Lab of the Technische Universität Darmstadt, Germany. The following people have mainly contributed to this project (in alphabetical order): 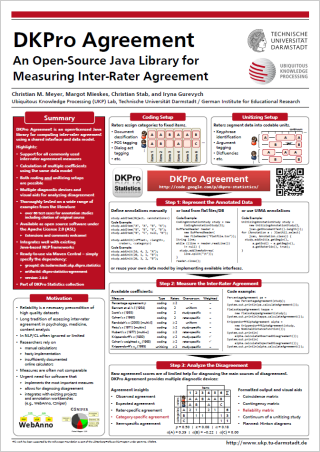 Support DKPro Statistics by allowing the use of cookies

Please support DKPro Statistics project by allowing this site to use cookies to track your activity. Doing so allows us to get an idea of how interesting our project is to the community. The EU General Data Protection Regulation (GDPR) requires us to ask you for your consent about the use of cookies. To learn more about how our site makes use of cookies and uses your activity data, please refer to our privacy policy. You can also always revise the choice you make here by visiting out privacy policy page.

Do you allow tracking your activity on this site using cookies?